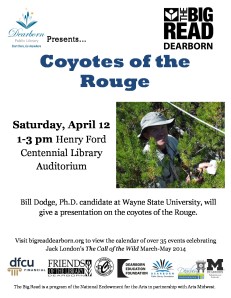 The Big Read Dearborn will host a free, special program about coyotes living along the Rouge River at 1-3 p.m. Saturday, April 12, presented by William ‘Bill’ Dodge, a local coyote researcher.

This interesting event will be in the auditorium at Henry Ford Centennial Library, 16301 Michigan Avenue.  The program is open to all ages.

A program on coyotes fits into The Big Read activities, which focuses on Jack London’s classic The Call of the Wild, because that book deals with dogs and wolves in the Yukon. Dearborn and the surrounding area don’t have wolves, but coyotes are part of the wildlife in the region.

Dodge is a doctoral candidate in the Department of Biological Sciences at Wayne State University.  His doctoral research involves gathering baseline data on the ecology of coyotes (Canis latrans) in the greater metropolitan Detroit area.  He earned B.S. and M.S. degrees in conservation and wildlife management from Michigan State University.  His M.S. thesis research examined survival, reproduction, and movements of moose in the western Upper Peninsula of Michigan.

Keep an eye out for other events, such as the “Do You Hear the Call?” Photo Exhibit opening on May 1 (turn in photos on April 28), audiobook superstar George Guidall on April 26, and C. Alexander London (author of the children’s series, Dog Tags) on April 30. The Big Read Dearborn ends with a Wrap-up Party at Henry Ford Centennial Library on Saturday, May 17, featuring real sled dogs, gold panning, an old-time photo booth, popcorn, and more!